Farewell to one of the good guys 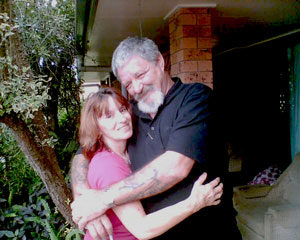 “If you are on the run or you don’t want your missus to see you on TV, shoot through now” boomed Father John at Mama Rene’s soup kitchen, Spring Hill.  Thus the TV and Film students from Centenary High were introduced to the crowd waiting to be fed and pick up a few groceries to help them out.  Father John said they were OK, so they were welcomed by the desperate and needy of our city.  A welcome that would not be there for mainstream TV who had burnt these people previously.

The result of that visit is the BeefBank Video shown on this website.

Who was this street angel that held such power over the hundreds gathered there.  Dressed in his usual gear, a dirty T Shirt, stubbies and thongs, was a big man whose craggy face suggested a tough, if interesting life.  To the casual observer he may have been a Wharfie or pub bouncer and almost certainly a bikie.  He may have been all three, but his generosity and caring nature made him a true champion of the downtrodden.

Mama Rene’s was unique.  I took volunteers there many times.  They were only required for an hour or so, but every one of them expressed a feeling of fulfilment at the end of the night.

Father John passed away and his funeral to say farewell was held in Warwick last week.  You won’t find glowing obituaries in the media or nominations for state awards but he will long be remembered by the thousands he assisted through his ministry.

BeefBank is proudly run by the Rotary Club of Brisbane Centenary. 100% of all donations going to the purchase and production of meals for the homeless and those in need. We work through Foodbank Qld to ensure charities on the frontline of tackling this issue get the support they need. For more information visit us at www.beefbank.org or follow us on Facebook to see how we have helped provide over 300,000 meals to those most in need.